We visited Ampler Bikes’ co-founder Ardo Kaurit in their new factory in Jüri, Estonia. The fast growing electric bike company represents a great crowdfunding case. Ampler Bikes (then called Ööbik Cycles) launched their Fundwise campaign to support product development and expand marketing activity in 2015. In addition to the Fundwise campaign, Ampler Bikes has also raised money on other crowdfunding platforms and the company’s value has more than doubled year-on-year. In 2020 the company plans to manufacture approximately 6000 bikes and the turnover is expected to be around €12M. Ampler Bikes mainly sells online, but they also have two showrooms in Germany where customers can test and try their bikes. Recently, Ampler Bikes has won in the Design Applier of the Year category at the EAS (Enterprise Estonia) Entrepreneurship Award 2020. Ardo Kaurit shared his experiences with different crowdfunding platforms and some of his ideas on how to organise a successful campaign.

It was quite early for Ampler Bikes. We officially started in early Summer 2014 and a year later we had finished the first prototypes. We participated in different events all over Estonia with the aim to get people to try out the bikes and to get the consumer feedback. Our personal project of interest started growing into an idea with a greater impact. Something fascinating started materialising and to achieve the results we needed financing, which is always a challenge for a startup. By then, we had maybe sold only a couple of bikes. We had low revenues but the expenses were high. I saw a Fundwise ad on Facebook while we were looking for funding options. Back then, Fundwise had only had maybe one or two campaigns. We had quite intense preparation for the campaign - it took us 2-3 weeks to get the campaign up and running. In the beginning, the pace of the campaign was slow, so we tried (together with Fundwise’s advice and on our own) to do as much as possible. For example, we visited a Radio 2 program after which the minimum goal came together quite quickly. As in many other crowdfunding campaigns, the investors gain more confidence and trust when the minimum is exceeded and no one wants to be left out. One of our biggest investors from that round was Madis Müür who till this day has supported us by participating in every round. Either way it was an interesting process. Fundwise was the first platform in Estonia that offered equity-based crowdfunding, therefore it was very new back then. It was new for the investors and for us too.

Did you manage to accomplish the objectives you set in the campaign?

Yes, but a lot has changed too. For example, some objectives and concepts have changed. But if looking at the bigger picture, the journey has been even more succesful than we first had imagined. The money played an important role in it because this particular cash injection helped with the preparation for the next round on Indiegogo. There we didn’t offer equity of the company but products. The aim was to finish off the product development and start preparations for mass production. We managed to successfully finish the Indiegogo campaign, which definitely was hard work but we received around 80 orders. Customers paid in-front and we got the ball rolling to begin the production. For a while we were independent, until the next funding round that helped to accelerate growth further.

You have also had campaigns on Funderbeam: what are your experiences on different platforms?

I think it was a right decision at both stages. Funderbeam offered some unique features. We had already had the experience from Fundwise so we met the Funderbeam team and thought we would give it a try. It was equally as successful and I’m glad we have raised money on both, Funderbeam and Fundwise. For a company it is actually a difficult project to execute. When talking about venture capitals or angel investors, I am not a fan of them because the negotiation period can be quite long, and it is usually led by the investor. You can send e-mails and ask, but if the investor is not interested or thinks it’s too early, the deal doesn’t go through. Crowdfunding platforms give an opportunity for entrepreneurs to tell their story: you can explain or show what you want to do, what your finances, goals and budgets are. For example, I make an offer to an investor, saying that today my company is worth €8M and I take on investments up to €1M and it is the investor’s decision to accept it or not. This way it is easier for the company and to the investors too as smaller amounts can also be invested. If someone tells me that my company is too expensive then it is basically not my problem, because I have made my offer and if the campaign succeeds, it is a reasonable offer. If the campaign fails then maybe the offer wasn’t good and I can try again. This is the positive part of it. Secondly, in the startup world, investors often have more rights which can be unfair to the founders, employees or already existing investors. Thanks to crowdfunding platforms we today have escaped from the strict contract terms. Of course we have sold a considerable share of our company to the small investors but today we have the freedom to take on the decisions we believe are the best for our company.

In your opinion, how much has Ampler Bikes’ worth increased after the Fundwise campaign?

It is difficult to make a valuation of a growing company. We have previously made the propositions to investors during the crowdfunding rounds. If I remember correctly, on Fundwise our pre-money valuation was around €750 000 and in the last Funderbeam round it was around €22,5M. All of the campaigns were successful and reached the maximum goal, therefore the valuation was fair.

Would you consider launching new crowdfunding campaigns in the future?

Yes, I have had very positive experiences. Of course partly because our company has done well. Today Ampler Bikes has 1500 shareholders and I am glad if we have earned them some of their money back. At the same time, if things were to shut down, 1500 people would not be so happy with us. This is why it can be risky. In addition, I like that it is up to the company to make a proposition. The owners usually remain in control of their enterprise without strict contracts. Many times I have described crowdfunding as a positive experience to many young entrepreneurs, who are about to raise money. I think it is especially good for companies that have an easily understandable product. For instance with us - potentially our customer is our investor and our investor could potentially become our customer. If you have a complicated product made for big corporations, it could be trickier.

How has COVID-19 impacted Ampler Bikes?

It has definitely had an impact and it hasn’t made our life easier. The supply chain has gotten a hit. March and April were particularly difficult. Customers had low confidence regarding their incomes: therefore, our sales were much lower than we had initially anticipated. At the same time, I think that compared to some other industries, we were in a favourable situation, because at some point the bicycle market was booming as people didn't want to return to public transport. Therefore, the sales were increasing. Regardless, we managed to have very good sales in May, June and July to balance out the slower Spring months. Overall, I think we handled the situation well - the people from the office worked at home and all of the other business’ processes seemed to work out. We build the bikes here in Jüri and sell online so it was possible for us to stay in control as we were already prepared for this long before.

What is your current focus?

The current main focus is kind of boring. We have found a route to market that is interesting to us. We continue to make bikes that are made for everyday use for people, who live in cities and travel to work. Of course there have been some minor changes, but the current emphasis is on achieving sustainable, yet fast growth. We aim to grow 100% yearly - this is our objective for the next year and we had the same goal for the last year. So far, we have managed to accomplish it. It’s challenging as the team is expanding rapidly. Today there are 75 of us, a year ago there were around 35 and I predict the next year there could be twice as many of us. The current business processes will have to be updated then.

What is the secret of a successful campaign?

From my experiences, I think our company’s profile was a good fit. We were a company who had an easy product: a bicycle with an engine. We sell to the end consumer, so the investor can be a potential customer and a potential investor can be a potential customer. These are important aspects. I think that people saw it from our eyes that we were motivated. We were honest and sincere - we said if we didn’t have an answer, without trying to seem better than we actually were. We went around some events, hosted investors in our workshop. It was not easy, but it's possible that it was easier than finding venture capital fonds. Launching a crowdfunding campaign is a useful process to understand your business, to put everything into order and fill in the gaps investors might refer to. Secondly, it is a good way to audit if the business idea is reasonable. If the investors are not interested and no one understands you, it could be the case that you are ahead of your time, but it could also be the case that maybe you just have a bad business idea. 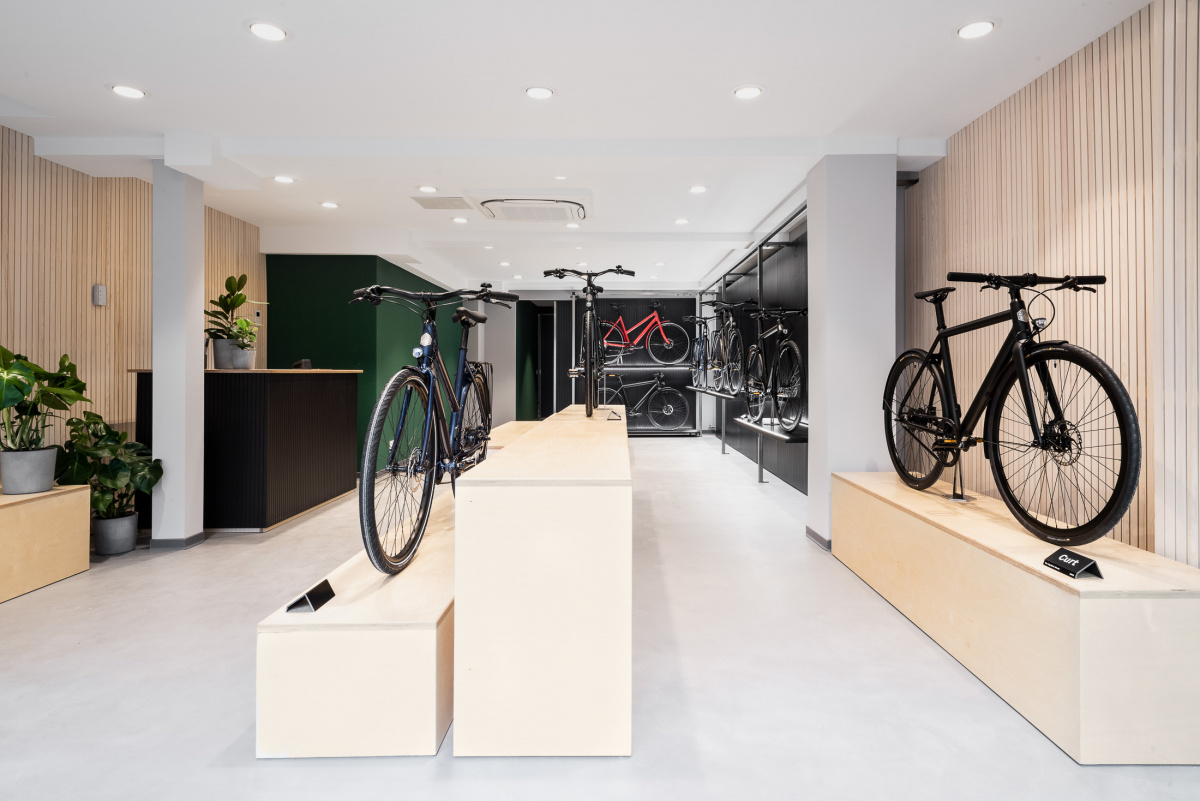 In the picture: Ampler Bikes' Showroom in Cologne, Germany